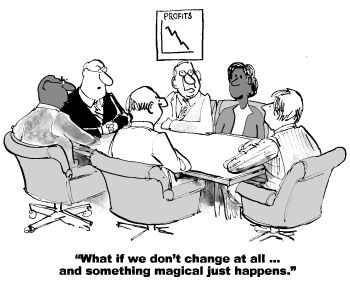 Even before the COVID-19 pandemic significantly altered our way of working, the need for change in organizations was overwhelming. The pace, complexity, and scope of progress today demands that companies take an agile and integrated approach, changing their business models to keep pace with the market.

We have applied a microscope to the issues around business change in today’s environment and will share our findings in a three-part series over the coming months. The first part focuses on the reasons why change so often fails.

An incredible 70 percent of business change programs fail, according to research from McKinsey & Company. There are several reasons for this.

Sadly, the change management models, tools, and processes widely used today were developed during a simpler time and are not usually up to the task the way it is now. Even though change requirements are now highly diverse, many organizations still use traditional methodologies. These focus on:

It takes foresight and open minds for companies in the throes of change to adopt new tactics and models that are less proven than the old ones, and as a result many stick with outdated methods.

It is a myth that people don’t like change…

Research by Stratify shows the truth is people don’t like to be changed. Since business change is largely about the people involved, its success or failure depends on getting people to change their own mindsets. To do that, you need:

Resistance from any one of these groups can jeopardize the success of the initiative.

The Stratify report ranked poor communication as the highest reason for business change failure. With 62 percent of respondents citing this as the cause, closer investigation revealed that a lack of effective communication led to insufficient collaboration among teams. This factor stopped them from taking ownership of the change and prevented them from performing at their best.

Inadequate communication also resulted in a lack of understanding of why the change was necessary and how it would affect them in the long term. Job security, workload, and future career prospects are prime concerns among employees. Without clear-cut communication on exactly how these might change, workers become demotivated and less likely to support the process.

Change is naturally resisted by many. Some wonder how it will impact their status and position. Others fret they may not be able to do something new. Some resist change because that is their default mental state, naturally seeking predictability and stability. Helping all your team make the transition to enthusiastic supporter and engaged participant is essential to success and rapid adoption.

Goals and clarity of purpose and how the company adds value are also two areas where many firms have put words on paper, but they have the soul and impact of lukewarm unflavored tapioca. These must be crystal clear, believable, aspirational, and noble as ideas capture minds and hearts, moving people to be better than themselves.

Need help with change, communication, leadership or clarity? Those are our specialty. Our approach has transformed lives and companies for dozens of years. Shouldn’t we talk? Get in touch and let’s set up a time to talk.

This reason was ranked second highest in the McKinsey report after 54 percent of respondents listed it as a reason for business change failure. Organizational change can’t succeed without leadership support, and simply stating that leaders are in favor doesn’t cut it. Leadership needs to actively champion the entire process and consistently back the team implementing the changes.

Business leaders should continually communicate the benefits of the transition to all stakeholders and be accessible to hear and reply to their concerns.

A lack of sufficient resources is one of the most common reasons for the failure of business change projects. Implementing and sustaining change are long-term ventures, which don’t happen overnight. The changes have to be designed, implemented, tested, refined and reinforced. This process is lengthier and more expensive than many company leaders realize, and projects often run out of funds.

If you don’t plan and adequately budget for resourcing the entire change process, you won’t get the full benefit of the initiative.

Tools, resources, and even leadership can be outsourced, but ultimately the employees will determine whether the change initiative succeeds or fails. Since everyone has different aspirations, motivations, levels of expertise and experience, learning styles, and personalities, it’s no wonder that building workers’ commitment to change is challenging.

Next month, we’ll discuss how we can change people’s mindsets to support change and contribute to making it a success. Stay tuned!