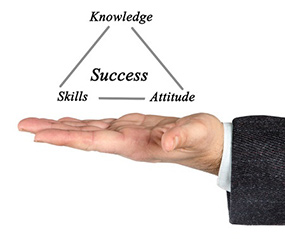 In my day-to-day life I get to engage with a wide variety of business leaders in a variety of market segments; it’s a brilliant way to know what is happening within the marketplace. I received a call from a client of mine, John S., in the oil and gas drilling sector.

He started the phone call by asking me how I was doing; I think he was expecting me to go down the “ain’t it awful” rabbit hole. I answered, “It’s never been a better time to be in business, granted maybe not so great in the oil and gas exploration business these days, but in the business performance coaching and training profession it surely is.”

I talked with him about the Carnegie Triangle* and how it has demonstrated that in any marketplace in anyone’s life the principles apply.

The Carnegie foundation did a study identifying the common traits and attributes of highly successful people and discovered that there are three attributes that are common: skill, knowledge and attitude.

The Carnegie foundation did a study identifying the common traits and attributes of highly successful people and discovered that there are three attributes that are common: skill, knowledge and attitude.The Carnegie Foundation report said that “85 percent of a person’s job success is a product of interpersonal skills or attitude and that only 15 percent of their success is the result of technical knowledge or skills.” This 15 percent was split in half between knowledge and skills at 7.5 percent each.

John was listening intently and added that he has experienced this in a couple of places. First, he shared how his university-age children were competitive athletes in their universities and the most successful athletes demonstrated that attitude was the largest component responsible for their high achievements and victories. One of his sons was a long-distance swimmer and in watching his son and his teammates, he could see in their body language whether or not they were going to have a good race.

I thought about my experience as a business coach and as a hockey coach and realized there is a common theme in the principles for success in both.

What’s different is the score sheet.

What’s different is the score sheet. In business the score sheet is heavily weighted towards financial success. There are other metrics but they are usually not as high a priority as financial. In sports, the game results are tracked on the scoresheet and usually who scores more goals or baskets or runs than their opponents determines a winner. While there are other metrics tracked, the score at the end of the game or event is the most important. What gets them there though is their attitude toward winning and how they have developed the skills required for success.In the current global economy drilling and exploration activities are at a low; some say it’s similar to the 1980s. John said that they were down to about 10 rigs, a third of their capacity, but they had the best results in the drilling in terms of few days to drill, no safety issues and the teams were highly efficacious. They are accountable to each other to meet and exceed their drilling objectives without jeopardizing anyone’s safety and being profitable.

Attitude plays the biggest part in the effectiveness of each and every one of us.

Attitude plays the biggest part in the effectiveness of each and every one of us. A good attitude equals a better life. You can train for skill and educate for knowledge, but if your attitude is negative you are not going to be able to have sustained change.As certified trainer and facilitator and coach I have experienced this firsthand with my clients and the athletes that I have worked with.

Attitude is the key to achieving a better spot in life!

Attitude is the key to achieving a better spot in life!*These statistics were extrapolated from A Study of Engineering Education, authored by Charles Riborg Mann and published in 1918 by the Carnegie Foundation. The cited figures come from the data on pages 106-107. The report is out of print, but can be located through a public library or a university library.